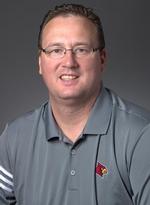 Scott Teeter is in his fourth year as head coach of the University of Louisville women's lacrosse team.

In his first season at Louisville in 2018, the Cardinals won five of their first six games before finishing the season with a 6-11 record. He guided freshman Caroline Blalock and senior Emily Howell to All-ACC honors.

In 2019, the rebuilding Cards went 5-13 and Tessa Chad earned All-ACC honors. Louisville went 5-4 overall in a shortened 2020 season. The Cardinals recorded wins over Vanderbilt and Marquette, two teams they lost to the previous season.

Prior to coming to Louisville, he served as head coach at Canisius for 15 years (2003-2017). Upon his arrival in Buffalo, he took the reins of a team that had won just 11 games in the program's first seven seasons. Under his guidance, he changed the culture of the program and was named MAAC Coach of the Year in just his third season after leading the Griffs to an eight-win improvement in 2005.

In 2011, Canisius won a school-record 14 games and capped the successful campaign with the program's first MAAC Tournament title. The Griffs added postseason championships in 2012, 2013, 2014, 2016 and 2017. In the run from 2011-14, the team became the first school in MAAC history to win four straight conference titles. Canisius also claimed regular-season crowns in 2013, 2015, 2016 and 2017 after sweeping through conference foes without a loss.

He was named the league's coach of the year again in 2015, 2016 and 2017, after becoming the first three teams in MAAC history to post a perfect 8-0 regular-season record.

He left Canisius as the winningest coach in MAAC history.

In addition, Teeter has also served as head coach of the Canadian Under-19 National Team since 2009. He guided the team to a bronze-medal showing during the 2011 championship in Hannover, Germany, before earning the country's first women's field lacrosse title at the 2015 FIL World Championship in Edinburgh, Scotland. Also in 2017, Teeter led the Canadian National team to a pair of silver medals, both at the FIL World Cup held in England and the World Games in Poland.

Teeter and his wife, Jennifer, have one daughter, Olivia, and one son, Lucas. 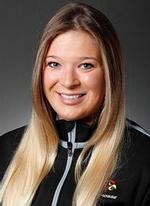 Kaylin Morissette, one of the most decorated players in Louisville lacrosse history, is in her third season as an assistant coach for the University of Louisville women’s lacrosse team and her fourth overall with the program.

In her first season, she served as student assistant and helped the Cardinals win five of their first six games before finishing the season with a 6-11 record. She helped guide freshman Caroline Blalock and senior Emily Howell to All-ACC honors.

In 2019, the rebuilding Cards went 5-13 and Tessa Chad earned All-ACC honors. Louisville went 5-4 overall in a shortened 2020 season. The Cardinals recorded wins over Vanderbilt and Marquette, two teams they lost to the previous season.

Prior to coming to Louisville with head coach Scott Teeter, she served as an assistant on Teeter’s staff at Canisius in 2017. She helped guide the Griffs to a MAAC Championship, while mentoring eight All-MAAC players, including Erica Evans, who was named MAAC Midfielder of the Year after breaking the MAAC record for points scored in a season.

Morissette graduated from the University of Louisville in 2016, following a storied lacrosse career. She ranks first all-time with 572 draw controls, which nearly doubles Emily Dashiell’s second-most 247 career draw controls. She ranks second in school history with 51 assists, 73 games played and 72 starts, third with 218 points and 119 ground balls and fourth with 167 goals.

In her four years, she helped lead the Cardinals to a 49-24 record, including a Big East Championship and the program’s first ever NCAA Tournament win in 2014. In 2015 and 2016, she was named IWLCA First Team All-American. She is one of two Louisville players to be named IWLCA All-American, joining Nikki Boltja in 2014, and the only player to earn the honor twice.

A native of Bowmanville, Ontario, Canada, she also competed for Team Canada at the World Cup in 2013 and 2017, helping Team Canada to a silver medal in 2013 in Oshawa, Ontario.